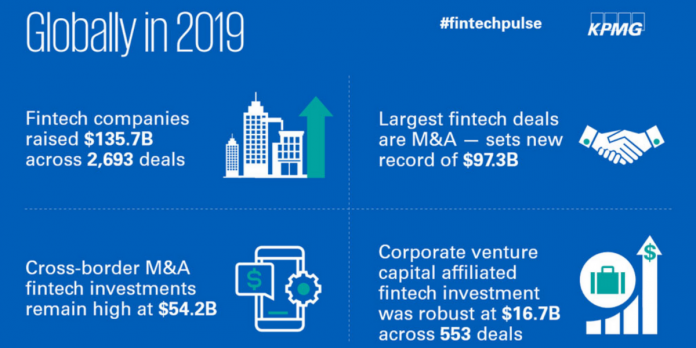 In its biannual Pulse of Fintech report covering the second half of 2019, KPMG said diversity characterised the period—with fintechs and investment expanding across product, sector and geographic borders.

KPMG said the expanding definition of fintech and its increasing reach and interconnectivity helped keep investment robust, despite the global economic and trade challenges that hindered growth in 2019, including concerns over Brexit and ongoing trade tensions between China and the US.

Despite these concerns, cross-border transactions remained high with $54.2 billion in cross-border merger and acquisition deal value across 138 deals.

Many niche areas of fintech continued to grow and evolve throughout 2019, with proptech investment growing from $1.9 billion in 2018 to a record $2.6 billion in 2019, while fintech-focused cyber security investment more than doubled from $316.9 million to $646.2 million.

Blockchain and cryptocurrency investment continued to fluctuate, falling from $6.3 billion to $4.7 billion year-over-year, although Facebook’s announcement of Libra and the People’s Bank of China’s announcement of accelerated research and experimentation on digital currency and electronic payments have helped breathe new life into the space.

Anton Ruddenklau, global co-leader of fintech at KPMG International, commented: “Over the past year, the lines have really started to blur between financial services and non-financial services—with fintech companies helping to bridge the gap.”

Ian Pollari, global co-leader of fintech at KPMG International, explained: “2020 is going to be an exciting and pivotal year for fintech, particularly as we start to see the impact of the digital banking licensees in Hong Kong, Australia and Singapore launching and endeavouring to scale, as well as other markets following suit.”