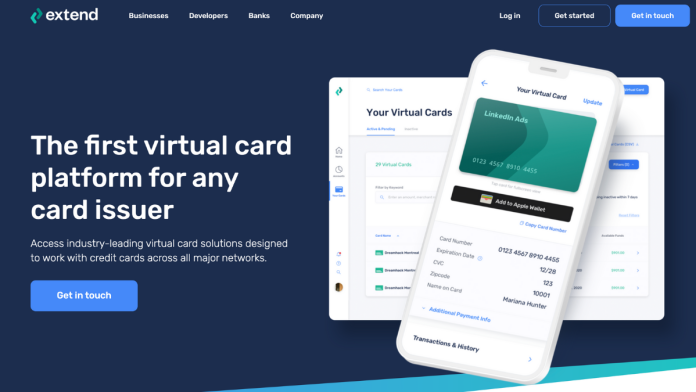 Fintech startup Extend has announced a $40 million series B funding round led by March Capital that will fund development of its virtual card platform and expansion of its service offerings, including a move into the consumer market.

The round was also backed by B Capital, Point72 Ventures, Fintech Collective, Reciprocal Ventures, Wells Fargo, and Pacific Western Bank.

Extend says the support garnered by such reputable fintech investors demonstrates the potential behind its unique vision for the future of payments.

The New York, USA-based fintech is aiming to modernise payments. It provides infrastructure for financial institutions and businesses, including the ability to easily develop and offer virtual cards. Extend also offers a number of API solutions, such as a buy now, pay later.

The fintech says close to 2,000 business customers currently use its platform, which is growing 30% month-over-month with a run rate “north of a billion dollars”.

Commenting on March Capital’s investment in Extend, Sumant Mandal says: “We were excited by the approach Extend has taken to building this digital infrastructure that enables modernisation for banks across the industry.”

“The market is inundated with neobanks offering new banking solutions but there’s little payment innovation coming out of established institutions. Extend is laying the foundation for the next generation of growth for major banks.”